On Friday, around 60 people from Kentish Town and across London gathered at St. Benet’s to hear Prof. Sarah Foot, Regius Professor of Ecclesiastical History at the University of Oxford, deliver a lecture on the Venerable Bede and the Early English Church. 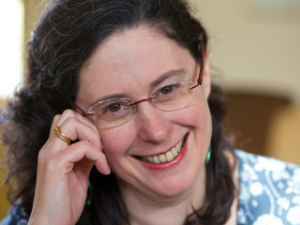 Prof. Foot comes from a highly academic background, as the daughter of the famed S.O.E. historian M.R.D. Foot. She has for many years researched and lectured on the early English church, and is one of the leading academics on the Venerable Bede, about whom she is currently writing a biography.

Prof. Foot spoke about her pride of belonging to a church which can trace its roots from Augustine of Canterbury, the ‘Apostle to the English’. In her work on the early English church, it was particularly interesting to hear her speak about how there were no English martyrs during the evangelisation of the Anglo-Saxons, and the uniqueness of the English church. 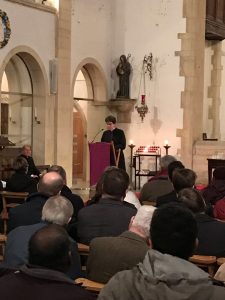 Several interesting points were made about Bede’s magnum opus, particularly its similarity in structure to the Acts of the Apostles – most notably, where the Synod of Whitby takes the place of the Council of Jerusalem. Prof. Foot also noted how Bede does not refer to the dating of years, as popularly thought, as anno Domini (in the year of the Lord), but rather as anno incarnationis Dominicae (in the year of the incarnation of the Lord). Many Bede enthusiasts will no doubt be eagerly awaiting her latest publication.