Earlier last month, my day off coincided with the opening of a new brilliant art exhibition. As an art historian, I could not possibly afford to miss this occasion, especially as this exhibition was on two masters of my favorite period: the Renaissance. Accordingly, I set off from my home in Camden on the bus 29, headed to Trafalgar Square, where a beautiful exhibition on the two artists, Andrea Mantegna and Giovanni Bellini, was waiting for me.

This was not the usual art exhibition, but an actual journey through one of the most vibrant artistic scenes in history: Renaissance Venice. The Renaissance was a time, roughly coinciding with the 15th and early 16th centuries during which Western culture flourished, especially in the forms of the arts, inspired by the new Humanistic philosophy and the rediscovery of the Classical world, which improved artistic techniques through the use of enhanced realism, especially thanks to improved studies on the perspective. The Renaissance began in the Florence of the Medici and flourished in the Rome of the Popes but if it happened at all is partly because of the role of Venice as an international hub through which Italy imported tastes and richnesses from afar lands, and in the Venice of the Dogi a local form of Renaissance art developed independently. 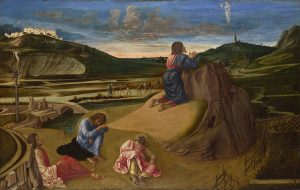 The exhibition explores the lives of Andrea Mantegna and Giovanni Bellini, two Venetian artists who spent most of their lives apart, the two Venetians became brothers-in-law when Mantegna married Bellini’s sister in 1453. They spent most of their lives separate from each other, one at the court of the Gonzaga in Mantua and the other in the Venice of the Dogi. Their careers were signed by a mild rivalry but also by a certain sense of respect and study of each other’s works whose influence lasted throughout their lifetimes. 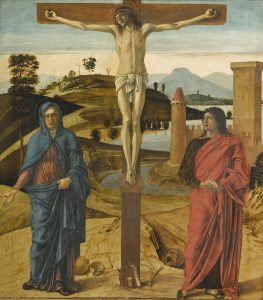 Mantegna, born of humble origins soon became an artistic prodigy, he was a master in the use of realistic perspective, his works are incredibly detailed, from the facial hair to the leaves, rocks and even the rivers and the horizon line. Giovanni Bellini was inspired by Andrea Mantegna’s experienced work when he began to work with his father Jacopo. Bellini was more of a colourist, his landscapes were more open and contemplative, his portraits though, even more realistic, if more stoic and less dramatic.

The exhibition takes us on a journey that for the first time puts the two masters side by side through incredible loans from the best art galleries in Europe and the world, often by confronting similar works side by side, perhaps the most amazing being the two artists’ spectacular renditions of the “Presentation of Christ to the Temple”, where Mantegna’s dramatic rendition clashes with Bellini’s quieter realism, both rooted in Renaissance neo-classicism, and the rediscovery of Greco-Roman statuary art. As good Renaissance masters the two artists covered both the religious and Christian and the secular and Pagan in terms of themes, often depending on the commissions, either being religious or coming from the Gonzaga or the Dogi. 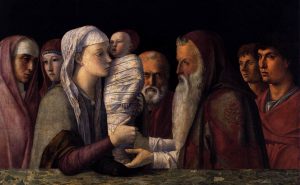 The exhibition hosts many a wonderful masterpieces among them; ethereal ones such as the “Virtues of the Gods”, “Minerva expelling the Vices from the Garden of Virtues or majestic ones”, such as the Hampton Court loan “Triumphs of Caesar”, up to the portraiture works. Most importantly, the Renaissance did rediscover Classicism but it was also a deeply Christian era, and most of the masterpieces of the time are entrenched in the Christian story, therefore we can also explore the lives of Christ and the saints through this exquisite art, the salvific mission of God through history, through beauty, we will not only enjoy the art but the art will be for us a window into heaven. This is one wonderful exhibition that requires to be seen and I am most glad and privileged to be able to give a lecture on it and take the parish on a trip there in a couple of weeks. I hope you will come and join me on this amazing adventure!