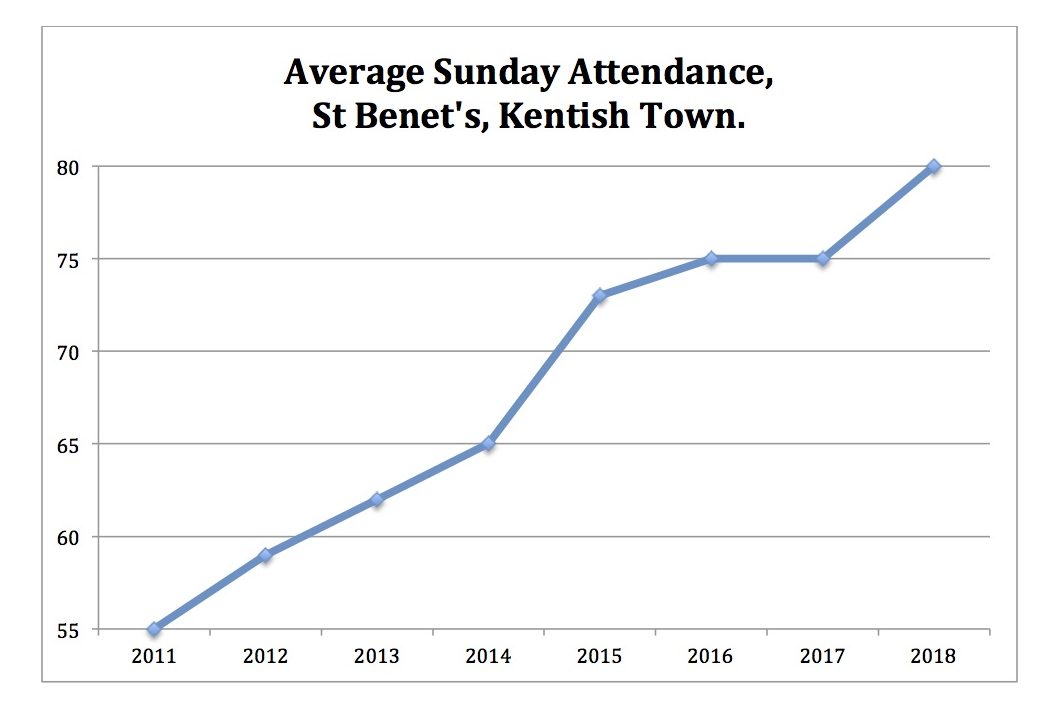 The latest figures for average attendance at St Benet’s show more people have worshiped with us this year than last, and that this represents an  increasingly significant trend over several years.  The average Sunday attendance for the year 2018 was 80.13. This is nearly double the figure for 2010.

For several years now, the PCC of St Benet’s has set itself the target of increasing the average Sunday attendance at St Benet’s. Each year, around this time, our PCC usually spends time thinking about our attendance figures, and we devote one Sunday morning homily each year to thinking about congregational growth and examining our statistics.

Although attendance figures are not the only measure of how a Christian community grows or should measure itself, we felt five years ago it was an element of our life that God was calling us to be more attentive to. We had noticed a trend of decline in attendance over the past fifteen years, and wanted to do something about that.  We had also noticed how families with children seldom worshipped with our parish for very long, and how they often felt frustrated by our lack of ministry to children. These figures show how God has been blessing the hard efforts of so many people as we have sought to tackle those two problems and grow in his love.

How is the average calculated?

This does not, however, mean we get 85 people each week – there are ups and downs. Our 11.00 am Mass usually has between 60-70 people present, of whom 15-20 are children. This can dip right down to 30-50 in half terms and August.  However, on high days (Easter, Mothering Sunday, St Benedict’s Day, Harvest etc.), and at Sunday morning children’s Masses, we can get around 70-90. The Vigil Mass on Saturday evenings at Ash Court Care Home regularly has between 10-15 attenders, and the Evening Mass on Sunday evenings usually attracts between 3-5.

What accounts for the growth we have seen?

The principal engine for church growth is GOD!  He is the one who has blessed our efforts and brought them to fruition. However, a parish community needs to be open to the promptings of God’s Spirit if it wishes to grow in number. There are a number of key things we felt God’s Holy Spirit was calling us to do in order to grow, which are discussed below:

Without a doubt, the growth we saw between the years 2013-15 was a response to the extra effort we put into ensuring there was good Sunday School provision at St Benet’s on Sundays. We noticed the number of children and parents worshipping with us increased as we got our Sunday School going.

In addition, a specific goal we set ourselves was to ensure that parents did not simply worship with us, get their children into our parish school, and then disappear.  We wanted their experience of our worshipping life to be so rich and appealing that they would want to stay. We found increasingly that more and more parents kept on worshipping with us, even when their children had obtained places at our school.

Although our main paradigm was to offer a relatively traditional Sunday Sung Mass with a Sunday School, on half a dozen times each year, we started to celebrate a children’s Mass at which the children would be present throughout.  These liturgies were usually very well attended.

We also experimented with provision for our older 7+ Key Stage 2 children.  Feedback told us this category of children was finding Sunday School too “childish” for their age, so we offered specific projects in particular periods of the year more attuned to their age.  Again, these projects spread over several weeks proved to be very popular. We found our best attendances were to be found during those periods.

The growth we saw in the years 2015-17 was in part linked with the Vigil Mass we started at our local Care Home for Senior Citizens, three streets from the church. A Vigil Mass is offered there every Saturday evening at 4.00 pm.

Our ministry to Ash Court had involved a Mass on other days in the week but had been very poorly attended.  Once we moved our Mass to Saturday afternoon, many more people started to worship with us.  This Mass became instituted as a Vigil Mass of Sunday. It is a little earlier than one might expect for a Vigil Mass, but this is to fit in with the afternoon routine of Ash Court, as their evening meal is at 5.00 pm.

There will usually be 6-7 residents of Ash Court present, 1-2 members of staff, 4-5 family members who are visiting residents, and 3-4 people from St Benet’s. The service is a Sung Mass with a short homily. This Mass has produced a baptism and a confirmation in the past year.

In the past year we have begun two Sunday evening Masses.  The 7 pm Mass attracts only a small handful of people, usually 2-5, but it is rarely the case that nobody comes. People have found this a very useful way of making their communion if they are unable to attend in the morning. Also, some people have said they find the quieter, shorter liturgical style of a Low Mass more what they want sometimes.

We have also begun a new worshipping community for German speakers, which worships at 4.00 pm on a Sunday once a month.  We noticed that St Benet’s had five or six bilingual or German speaking families. This Mass offers an opportunity for people to worship and hear a homily in German, then spend time together in German conversation over coffee and cake.

We have found people have travelled from far and wide to be present, and lots of new people have been drawn to St Benet’s as a result of this service!  In the few months it has been going, the lowest congregation has been 11, and the highest 17.  We hope to put lots of effort into this project over the next year to see if it grows further.

Thanks be to God for his many blessings.  We hope and pray God will give us the grace and insight to see where he is calling us to grow, as we examine these figures in greater depth over the next few weeks. What can we do to grow further the Sunday morning 11 am Mass? Where is God calling us to take our children’s work next? How is God calling us to reach out and serve the people of our parish more with opportunities for worship?  These are the questions we hope to think about as we seek to grow in number, in faithfulness to the Gospel of Christ, and in depth of love for each other.