Last week, Fr. Peter and Edoardo took our young confirmands on a tour of the National Gallery. The theme of the trip was to explore key moments of Jesus’ life through the great masterpieces found in that great collection. 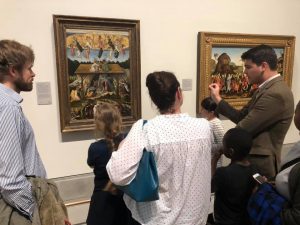 We started our journey through the life of Christ in the Sainsbury Wing, which hosts one of the most outstanding Renaissance art collections in the world.
The children were given some clues and the idea was that they had to find paintings related to Jesus’ life by using those clues. Unsurprisingly enough, it didn’t take them long to spot such works.
We divided Jesus’ life into 7 great moments, half of them related to his birth: the Annunciation, the Nativity and Baptism, and half of them related to his Passion: the Last Supper, the Crucifixion, Resurrection, and Ascension.
Soon enough the children found some amazing artworks such as that beautiful Mystic Nativity by Sandro Botticelli, which not only represents the birth of Our Lord, but also creates a sinister related to the apocalyptic message of Christ regarding the end of days. 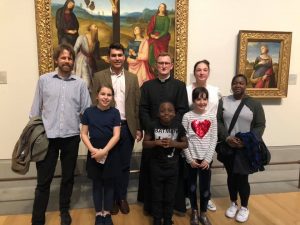 We then moved to that graceful work of art which is the Baptism of Christ by Piero della Francesca, which illustrates the journey of Christ to the Jordan River with John the Baptist, not only a great work but also an early experiment on the technique of linear perspective.
We then admired the overwhelming Annunciation by Carlo Crivelli, which shows Our Lady receiving the message from the Archangel Gabriel, in what looks like a lively Italian Renaissance town, the children also located a similar work by Filippo Lippi, a great painter, but also a friar who escaped the convent with a nun with whom he had a child!
We then moved to those works of art related to Christ’s Passion. 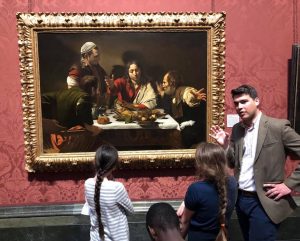 In the Baroque wing, the children found the striking Last Supper in Emmaus by Caravaggio, whose use of light and dead nature still fascinates the viewer.
Finally we quickly admired Raphael’s Crucifixion as well as late Gothic representations of the Resurrection and Ascension. The children were fascinated to find the flag of England in those, they were even more fascinated to learn about its story!
The banner of the resurrection was used by many Medieval Italian city-states, one of them was Genoa, one of the largest naval powers at the time, when the English borrowed Genoese ships to make their way to the Crusades, the Doge of Genoa granted them the use of their flag, which eventually became the banner of Saint George! 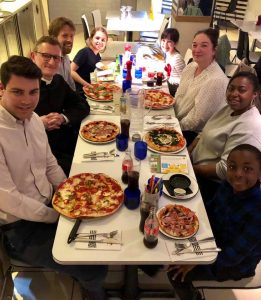 Both the children and parents were fascinated by the amazing artworks that we saw at the National Gallery, what a great privilege it is to live in a city like London and to be able to explore the life of Jesus’ through some of the greatest masterpieces ever made.
Although, it has to be added, the highlight of the day, was really having a nice dinner at the nearest Pizza Express..! Yummy!