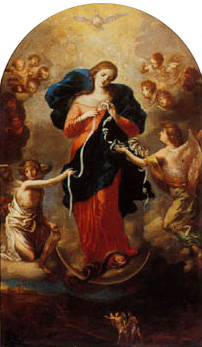 Our Lady the “Knotenlöserin,” the Untier of Knots, by Johann Georg Schmidtner.

In the year 1700, a canon of the Church of St Peter in Augsburg had a new picture of Our Lady painted. His name was Hieronymus Langenmantel and he set up the new image in his church as a shrine.

The picture itself was in fact a thank offering. It was painted in gratitude for the reconciliation of his grandparents.  They had become almost completely estranged, but as a result of Our Lady’s prayers had been reconciled and spent many years of happy marriage together before they died.

But the picture he had made is a very intriguing one indeed.   For the image of Our Lady depicted there in St Peter’s Church has ever since been known under the title of the “Knotenloserin” – Our Lady the Undoer of Knots.

In the painting Langenmantel had made, Our Lady stands on the moon, crowned with stars, and with one foot crushing the snake Satan; but in her hands she holds a confused bundle of knotted rope or cord.  In the image, she’s undoing the knots, teasing out the confused muddle, and straightening the strands of rope, which she hands to two rather languid looking cherubs on either side of her.

Some of you might be thinking this image is an example of just the sort of saccharine baroque whimsy best left in the C18th where it came from. Let me persuade you otherwise.  Baroque this painting might be, but whimsical it is not, for this curious image has deep patristic roots.

On one level, the metaphor being presented to us is a very simple one.  Pilgrims come to the shrine of the Knotenloserin with the knots and difficulties of their lives and ask for Mary’s help in sorting out their confusions and muddles.

But, when Langenmantel had that picture made, he had actually been inspired by the words of St Irenaeus who centuries before had written the following: “the knot of Eve’s disobedience was loosed by the obedience of Mary.  For what the virgin Eve had bound fast through unbelief, this did the virgin Mary untie and set free through faith.”

Langenmantel’s point was very clear: Mary is not just one saint amongst many; she is like a new Eve, who through her cooperation in the Paschal Mystery helps undo the bond of sin that the old Eve had tied fast in the Garden of Eden, when she ate from the Tree of Knowledge.

That great truth is communicated to us through the imagery of our first reading from the Book of the Apocalypse. If you remember, in Genesis Eve was tricked by the serpent. Here, this amazing heavenly woman clothed with the sun, participates through her child-bearing in the defeat of that same Serpent.

From the earliest times, it is clear the writer of the Book of Revelation saw in Mary the characteristics of a new Eve. And if she is a new Eve, then surely she can have only one destination. She must return to Eden, to the Paradise from which her ancestor was excluded.

At the heart of the feast of the Assumption we celebrate the fact that through Christ’s victory over death, Paradise has been re-opened to humankind. In that new Eden, which is God’s heavenly Kingdom, the human family he created will dwell together is perfect communion with him, as had always been intended.

In Mary’s entry into heavenly glory, we see the first signs of that wonderful, promised renewal, which without her cooperation and obedience would not have been possible.

But the Book of Revelation makes clear that it is only through her child-bearing, that the woman clothed with the Sun has any significance or worth as a new Eve.  It is only by the merits of the Christ whom she bore, that Mary is given the singular privilege of being the first in creation to participate in her son’s Resurrection.

Because of that, in her glorification, and in her perfect communion with God, we see the glorification and perfect communion that we ourselves hope for.  For through Mary’s child bearing, Satan was indeed thrown down, and heaven opened to us at the cost of her son’s own blood.  The knot which Eve tied fast we see undone and unpicked, so that we are free to enter that heavenly Paradise from which the old Eve fled in shame, but which the New Eve now enters in glory.